Japan is a fascinating tourist destination where you’ll find a seamless blend of old traditions and new technology. Visit here to discover gorgeous natural landscapes just a short train ride from sparkling, sprawling cities and loud, jarring outlets a short distance from quiet areas full of nuanced rules. Japan is the kind of place where people will wait patiently in line for water after a natural disaster, but socially ghost you if you accidentally offend them. Japanese culture and language so distinct, it’s tough to list all the Japanese customs you should know before heading to Japan. We could spend hours describing the country’s spectacular cuisine, listing the top spots to get ramen( Japanese food), sharing all the hidden gems, and explaining the different ways you’re likely to accidentally offend someone. However, for now, we’re sticking to the basics: all the things we think you need to know to help make sure your Japan shore excursions and tour to Japan is fun and only full of good surprises, especially, help you save some money along the way, too. Here are 10 things every traveler should know before going to Japan.

Bowing is nothing less than an art form in Japan, respect pounded into children’s heads from the moment they enter school. For tourists, a simple inclination of the head or an attempt at a bow at the waist will usually suffice. Bowing is also one of the Japanese business etiquettes which you can see in any office here.
The duration and inclination of the bow are proportionate to the elevation of the person you’re addressing. For example, a friend might get a lightning-fast 30-degree bow; an office superior might get a slow, extended, 70-degree bow. It’s all about position and circumstance. 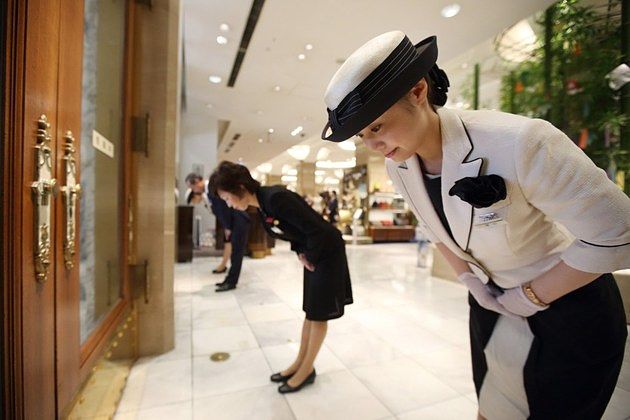 In addition to bowing, addressing someone properly is key. Just as a “Dr. Smith” might feel a little insulted if you were to refer to him as “Smith”, so would a Japanese if you do not attach the suffix “san” to their last name, or “sama” if you are trying to be particularly respectful.
Usually, children are content with just their first names, but you can add the suffix “chan” for girls and “kun” for boys if you like.

Here are some Japanese dining customs you should know:
If you’re with a dinner party and receive drinks, wait before raising the glass to your lips. Everyone will be served, and someone will take the lead, make a speech, raise his drink, and yell “kampai!” (cheers).
You will receive a small wet cloth at most Japanese restaurants. Use this to wash your hands before eating, then carefully fold it and set it aside on the table. Do not use it as a napkin, or to touch any part of your face.
Slurping noodles or making loud noises while eating is OK! In fact, slurping hot food like ramen is polite, to show you are enjoying it.
You may raise bowls to your mouth to make it easier to eat with chopsticks, especially bowls of rice.
Just before digging in, whether it be a seven-course dinner or a sample at a supermarket, it’s polite to say “itadakimasu” (I will receive). 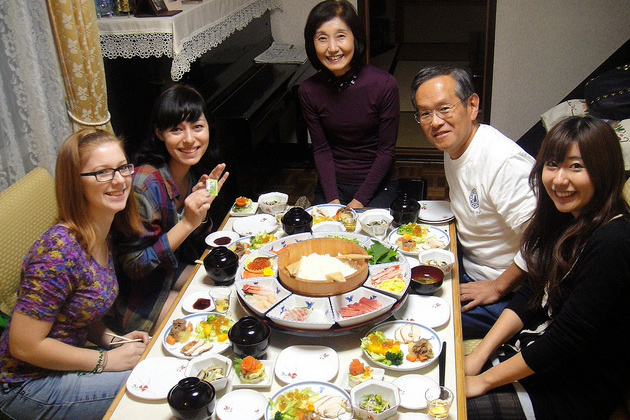 3. No Tipping in Japan

There is no tipping in any situation in Japan – cabs, restaurants, personal care. To tip someone is actually a little insulting; the services you’ve asked for are covered by the price given, so why pay more?
If you are in a large area like Tokyo and can’t speak any Japanese, a waiter or waitress might take the extra money you happen to leave rather than force themselves to deal with the awkward situation of explaining the concept of no tipping in broken English.
Just remind yourself: a price is a price. 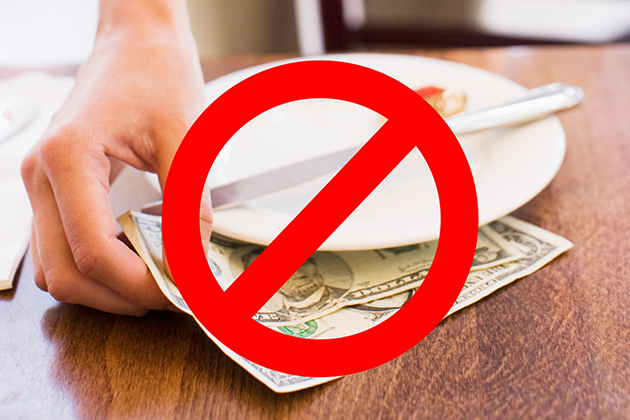 Depending on the restaurant you decide upon for that evening, you may be required to use chopsticks. If for some reason you aren’t too adept with chopsticks, try to learn before passing through immigration. It’s really not that hard.
One false assumption among many Japanese that’s slowly being dispelled by time is the “uniqueness” of Japan. Japan is an island nation; Japan is the only country that has four seasons; foreigners can’t understand Japan; only Japanese can use chopsticks properly.
I cannot count the number of times I’ve been told I use Japanese chopsticks with skill and grace, despite the fact I’ve seen three-year-olds managing just as well. If you’re dining with a Japanese, don’t be surprised if you receive a look of amazement at your ability to eat like a Japanese. 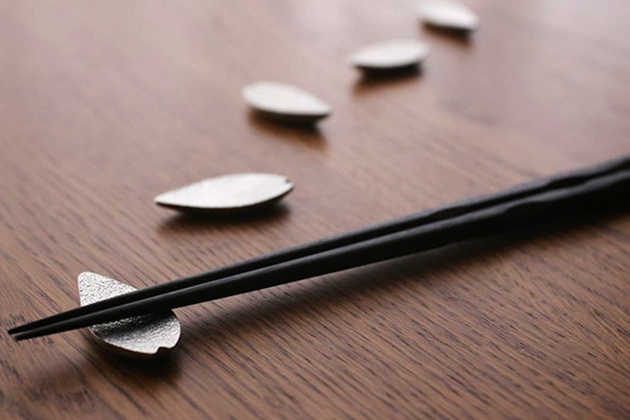 Take off your shoes at the entrance to all homes, and most businesses and hotels. Usually, a rack will be provided to store your shoes, and the pair of guest slippers will be sitting nearby; many Japanese bring a pair of indoor slippers just in case, though.
Never wear slippers when you need to step onto a tatami mat (used in most Japanese homes and hotels; the standard unit of measurement for the area even today), and be careful to remove the toilet slippers waiting for you in the bathroom. It is extremely bad form, for example, to reenter the main room of a house wearing slippers that have been running across the dirty linoleum. 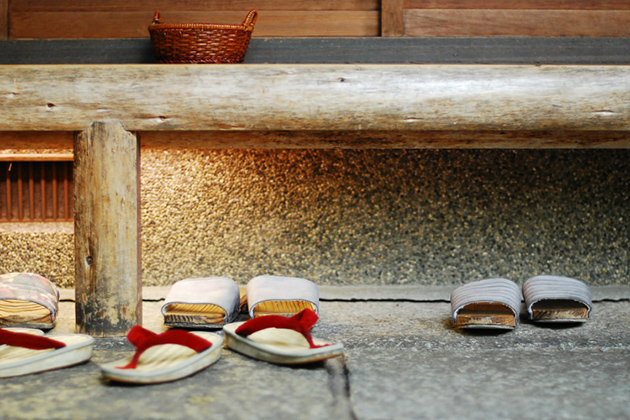 SARS is long gone, though I did happen to see a “SARS Preparation Kit” during my brief stay in a Japanese hospital. Nevertheless, sterilized masks, like the ones you’d see in the emergency room, are commonly used by salarymen, office ladies, and municipal workers to protect other people from their germs.
Rather sensible when you think about it, as masks do not protect the wearer so much as the ones around him. The reason could be anything from a slight cold to simply being worried about exposing other people; don’t let it concern you on your Japan shore excursions. 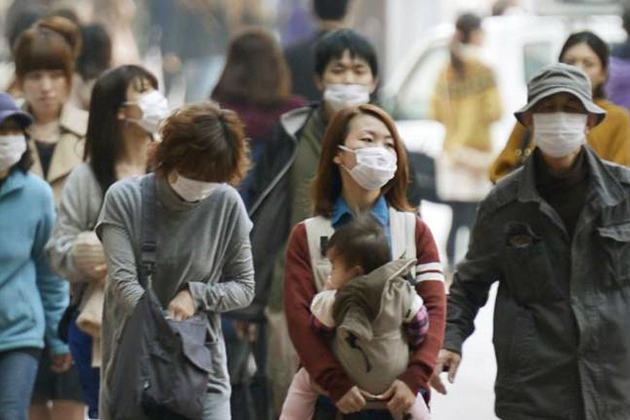 When groups of high school students in Japan were asked to identify the dangers facing children today, the majority agreed on the number one threat: individualism.
Japanese society is focused on the group. Western cultures are focused on the individual. Does this mean that the Japanese are nothing more than worker bees in a vast hive of steel and concrete? Certainly not, but their presentation of such individual qualities are carefully calculated and given in doses.
Drawing attention to yourself as an individual is a huge no-no: don’t blow your nose in public, try to avoid eating while on the go, and don’t speak on your cell phone in crowded public areas like trains or buses. The main problem with this is that foreigners simply can’t avoid standing out; we stick out like sore thumbs no matter how long we’ve been here, or how much we know about Japanese culture and society.
As a result, being in Japan gives foreigners the status of D-level celebrities: you’ll get glances, shouts for attention, calls to have pictures taken with people, requests for autographs (happened once to me on a southern island), and overall just more awareness of being a “stake that sticks out”.

Public bathhouses are alive and well in Japan. Sento, or neighborhood bathhouses, can be found from the largest area in Shinjuku to a small town on the island of Shikoku. Onsen, or hot springs, are very popular as weekend excursion resorts.
Unlike in western cultures, the Japanese bath is used after you have washed and rinsed, and feel like soaking in extra-hot water for 10, 20, 30 minutes. It’s an acquired taste to be sure, but can be very relaxing.
If you happen to be invited into a Japanese household, you will be given the honor of using the bath first, usually before dinner. Be extra careful so as to not dirty the water in any way; the sanctity of the ofuro (bath) is of utmost importance.
Take the time to visit a sento if you have the opportunity. These are places without barriers, without regard to skin color, age, or language… well, they are separated by gender with the exception of some mixed-bathing areas. Lying in the hot water and slowly listening to my heart beat slow down is a time when I feel most attuned to Japanese culture. 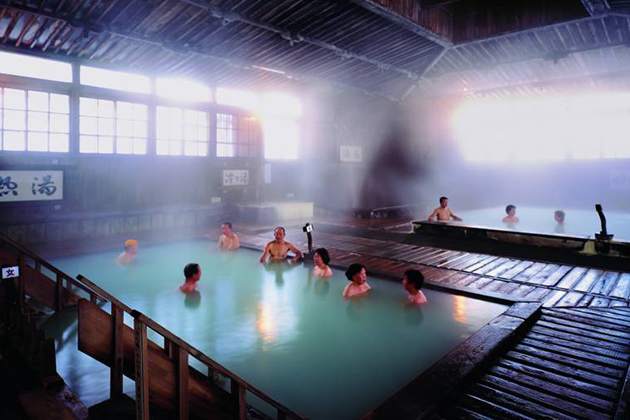 Japanese will generally assume you are a native English speaker until you prove otherwise. Even during a short visit, you’ll see:
A group of schoolchildren in neatly pressed Prussian uniforms walking across the intersection, shouting “Hello! Hello! Hello!” as they assess your foreign features
A random person just walking up to you and asking “Where are you from?”
Friendly? Certainly. But I can see how constant celebrity status might get confusing or frustrating for travelers who don’t speak English.
Although you may speak some or fluent Japanese, the default language of choice is English. Many Japanese will insist on using their own English language ability, however, limited to converse with foreigners, in spite of the fact that the person on the opposing end may have more knowledge of the local tongue. 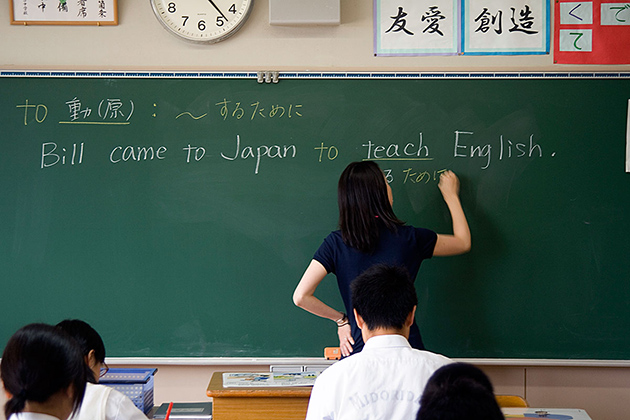 Every Japanese person I have met warns me to be safe in my travels, to take care of my belongings. Every foreigner tells me not to worry, nothing can go wrong, nothing will be stolen. This may be based on individual experience, but there are other issues: The fear of crime in Japan is high, especially among Japanese citizens. Murders happen. I repeat, murders happen. People are attacked, robbed, assaulted, raped, beaten, and swindled.
However, Japan’s low crime rate is evident when you see businessmen who have missed the last train sleeping outside on a park bench, or a group of 5-year-old boys walking by themselves for over a kilometer to make the starting bell at school.