The Korean Demilitarized Zone (DMZ) is the northernmost place of the south, about 700 meters from South Limited Line. It was created at the end of the Korean War to exist as a zone dividing Korea into North and South Korea. Over the years, the North Koreans have built a number of infiltration tunnels under the DMZ, designed to be used to launch a surprise attack into the South. The 3rd Tunnel was discovered in 1978 by South Korean forces. It spans over 1,635m in length, 2m in width, and 2m in height and is located 52km from Seoul. It is estimated that approximately 30,000 soldiers could move through the tunnel per hour. The scale is similar to the 2nd Tunnel, but it was thought to be more threatening as an invasion tool than the 1st and 2nd Tunnels. This tunnel has become a major tourist attraction, with visitors donning hard hats and riding a monorail down into the tunnel. Inside, the DMZ line has been blocked off with concrete barriers.

In 2000, North and South Korea agreed to connect their two train lines, in order for South Korea to gain access to Asia and Europe via the Trans-Siberian Railroad. South Korea erected the gleaming $40 million Dorasan Station with a hope that this agreement would open a new period of peace and prosperity. It is expected that Dorasan station will be in charge of services for customs and clearance of a hub of trade among North Korea, China, and Russia. Unfortunately, after the first and only “test run” in 2007, this station has sat completely empty with no trains arriving or departing from its platforms. Therefore, the station was only open for tourists. It has become a historic spot featuring a symbol of division and a gateway of exchanges between the south and north at the same time. 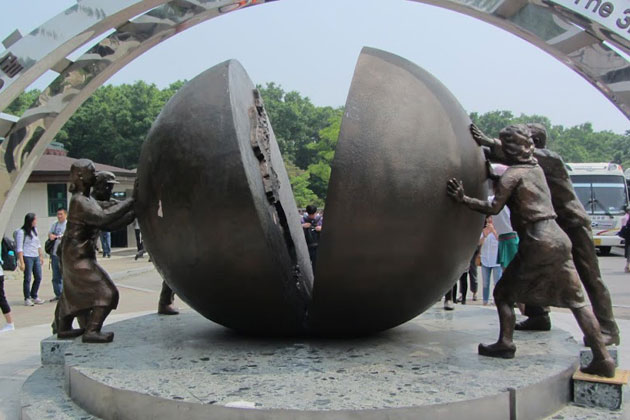