Standing right opposite the main entrance to the Hue Citadel and facing out across the river, Flag Tower, also called as the King’s Knight, exists as the focal point of Imperial City. It is known as Vietnam’s tallest flagpole with a huge structure featuring three flat-top pyramids, one lying on top of another. 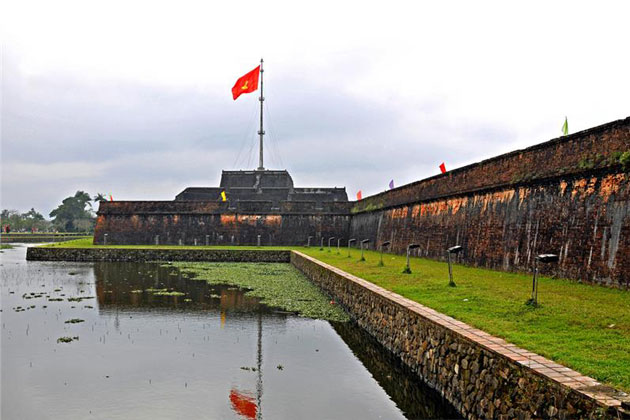 Erected at the beginning of the 19th century during Emperor Gia Long’s reign, and later improved by his son, Emperor Minh Mang, it was a large rampart to the south of the Noon Gate. The flag-tower is 17.40 m high and consists of three terraces. The first is 5.60 m high, the second ,5.8 m, and the third, 6 m. The higher the terrace, the smaller its surface. On the third terrace, are 8 little buildings housing one canon each and two sentry-boxes at opposite ends. 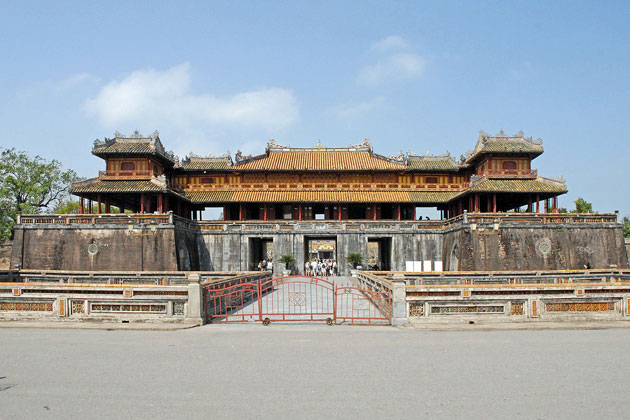 The 29.52m flag-staff was originally made of wood. It was replaced by a new one in 1846 by Emperor Thieu Tri and again in 1914, with French assistance, with a cast-iron one after having been destroyed by a typhoon. In 1947, after the return of the French colonialists, the staff was again destroyed and one year later a new 21m high one was built in concrete. It had four parts, the three uppermost enclosed in a balustrade, the bottommost part having a concrete terrace with many stairs. From bottom to top, the column is fixed by iron stems used as a stair. In feudal times, a yellow flag flapped everyday on top of the staff. It was replaced with a larger one on festive occasions. Made of wool or velvet, this flag was brocaded with a dragon design in its center and fringed with serrated lace. Although the flag tower has been destroyed and rebuilt a number of times, it is still a national symbol. Visitors are allowed to take photographs here but note that it is unacceptable to climb up on the structure.