Jusangjeolli Cliffs which were created between 250,000 and 140,000 years ago are stone pillars piled up along the coast. They were formed when the lava from Hallasan Mountain erupted into the sea of Jungmun. They are rock pillars shaped like cubes or hexagons of various sizes and almost seem as if stone masons had carved them out. The 20-meter cliff makes it a popular spot for high tide and sea angling. The waves of the high tide crashing into the side of the cliff provide a spectacular view of the ocean surrounding the pillars. 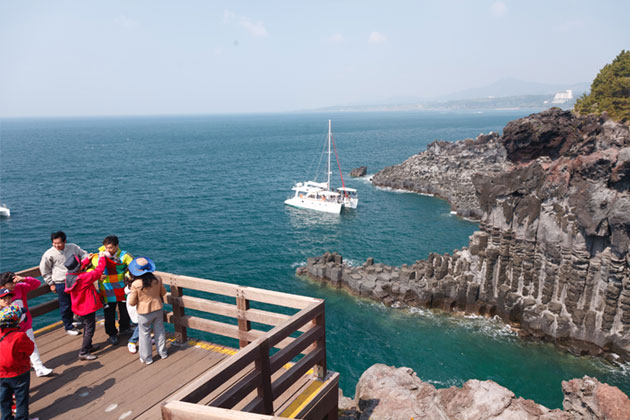 With almost perfect hexagonal columns, called Jisatgae Rocks as well by locals, jutting 20 meters into the sky, the cliffs run for 2 km along the Daepo coast near the Jungmun tourist complex. From the observation deck above, the rock formations are countless and even though there has been much corrosion and weathering caused by the ceaseless beating of the ocean the columns stand strong and fortified. Jusangjeolli Cliff looked so gorgeous with the rays of sun whose colors reflecting to the ocean and to the cliff are warming and inspiring. The effect was very soothing and calming, adding the windy weather of autumn that was perfect for a shore excursion. 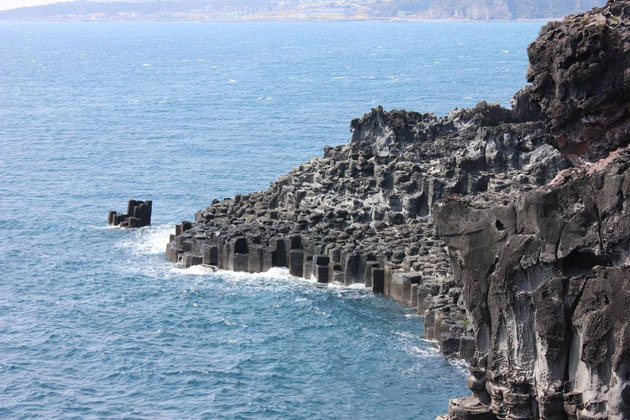 A park has been erected parallel to the cliffs allowing visitors to walk the 2 km distance so the pillars can be seen from as many angles as possible. In fact the path that runs through the park is a designated Olle walking trail, route 8, which would make the cliffs a perfect resting spot before continuing on with the trek. The majority of the park is rather solitary and well maintained; full of beautiful flowers, tall grass and palms trees of varying types. Occasionally, along the path there are local women selling fresh and raw fish.