Although there are more than 300,000 traditional festivals (or called Matsuri) abound in Japan and quite different in each area, whenever Japanese festivals are mentioned, people will think of the warmer months with full of Japanese celebration. However, Japanese Matsuri can be held throughout the year. Thus, whenever your Japan shore excursions start, you can always indulge in traditional festivals with the sound of traditional drums or the cheerful screams every weekend. Fortunately, visitors might have a chance to watch the famous summer fireworks at the end of the day. Asia Shore Excursions would like to recommend tourists a list of unique festivals in Japan from traditional events to modern events.

If travelers in Japan shore excursions are interested in seeing people accompanying portable shrines, Sanja festival must be on their itinerary. Sanji Matsuri, one of the biggest Japanese festivals in Tokyo and celebrated for over 700 years. It annually takes place in three days on Friday, Saturday, and Sunday in May with about 1,500,000 participants consisting of a big procession of priests, city officials, geisha, musicians and dancers wearing Edo Period costumes. 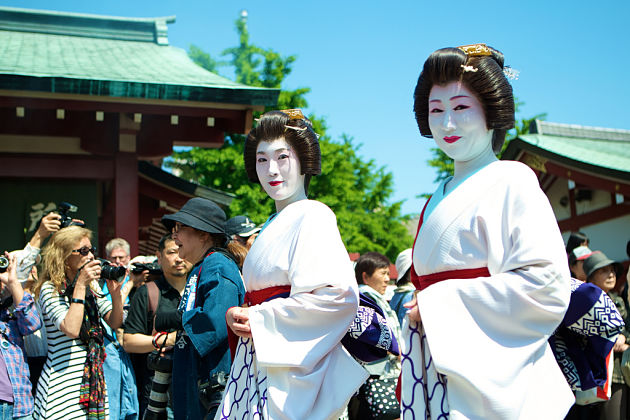 The event appears with about one hundred portable shrines (Mikoshi) in which Shinto deities (kami) accompanied about the streets to bring the best luck and good fortune to the local residents.

Sapporo Snow Festival is on-top-winter attractions in Japan shore excursions and held annually during one week every February in the capital of Sapporo, Hokkaido. The event was firstly started in 1950, since a joy of high school children when building a few snow statues and currently it has developed into a commercialized event with may spectacular snow and ice sculptures which attracting a huge number of overseas visitors. 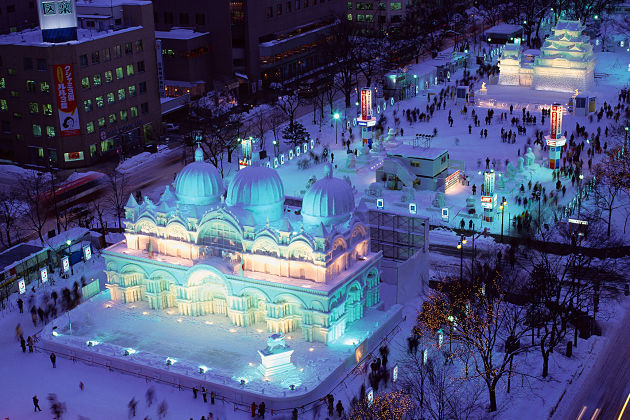 The Sapporo Yuki Matsuri is organized on three sites including the Odori Site, Sukukino Site, and Tsu Dome site. The Odori Site is the main site exhibited the festival’s famous large snow sculptures and more than one hundred smaller snow statues. The Susukino Site, called after Sapporo’s largest recreational district and located on the only subway stop south of Odori Park, exhibits about one hundred ice sculptures. The last site is Tsu Dome, located in the less central with three types of snow slides, snow rafting and more snow sculptures, which consists of many food stands and a stage for events.

Kanamara is an annual festival held in April in Kawasaki and its worldwide fame has known as the “phallus festival” or “penis festival” due to its unusual movable shrines. Kanamara Matsuri has a special feature that is a unique penis- shaped snacks and eerie souvenirs in the celebration of fertility and gender. Besides relishing the atmosphere of the festival, Kanamara Matsuri is scared destination for global trippers in Japan shore trips to pass through a long distance to wish for children and for the world without discrimination when it comes to gender identity. 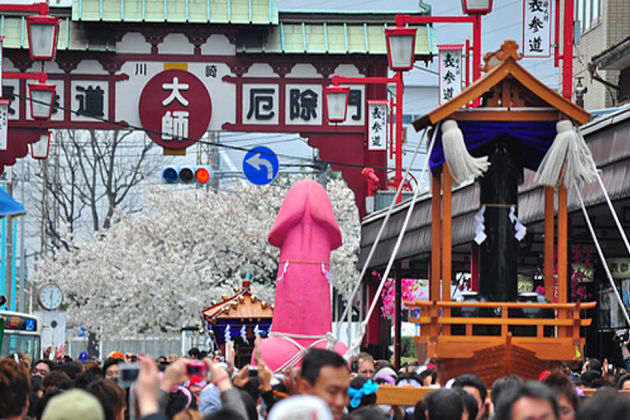 The Kanamara Festival is held at Kanayama Shrine, which is the destination of many petitions for prosperity, fertility and best of luck in relationships. In addition, visitors take part in this celebration in the daylight no matter what illness, sexual orientation they are facing to.

In your Japan shore excursions, you couldn’t miss out on the Kanda Matsuri. This is one of the biggest festivals in Japan and a festival for the Kanda Myojin Shrine. All main activities will take place during the middle of May, it is around the 15th of May. 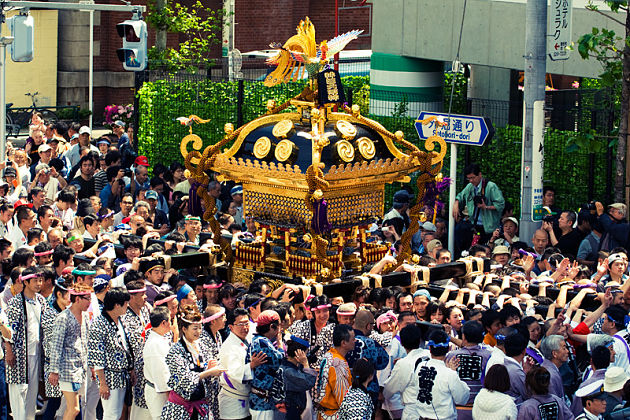 The highlight of the first day in Kanda festival is the parade of about 500 people wearing clothing from the Heian period (794-1185), accompanying the portable shrines called Mikoshi. Kanda Matsuri will start at Kanda Shrine and move to the popular electronic district Akihabara, which creates an impressive transmission from past to future and return to the shrine in the evening. In the following day, tourists of Japan shore excursions can see about one hundred of portable shrines, led by men dressed up as geisha and carried by men wearing traditional Japanese loincloths, heading toward Kanda Shrine.

Gion Matsuri, celebrated in July, is one of the three biggest festivals in Japan. Even though visitors of Japan shore excursions from many countries can enjoy the matsuri during the entire month of July, the highlight is the grand procession of floats named “Yamaboko Junko” on 17th and 24th. 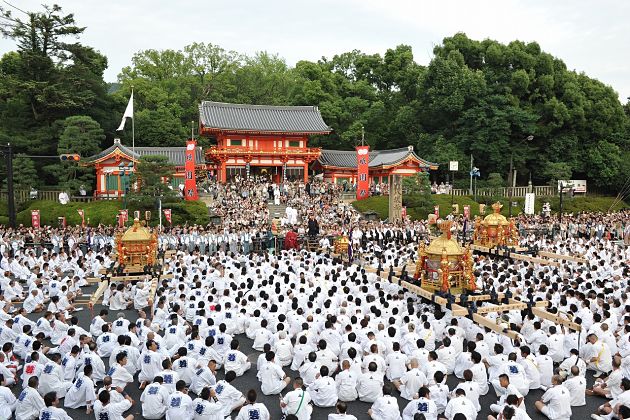 Gion Matsuri is the high time for trippers to know deeply about Japanese costume and their legends through the parade of 33 carefully prepared festival float in different themes which relate to Japanese traditions.
Although the daytime festivities is too crowd, visitors should stay until dark because there is a lot of sparkling scenes as lanterns on the floats. The best thing that most visitors feedback is that join in the matsuri as if they can travel back in time to discover a traditional Japan. If your itinerary is set in summer, don’t forget to visit Kyoto and the fabulous Gion Matsuri.

Tourists in Japan shore excursions participate in Soma Nomaoi, a Significant Intangible Folk Cultural Asset of Japan, as if dating back over a thousand years, undergoing the martial skill and horse riding as Samurai does. Soma Nomaoi is celebrated in Soma District, which has long been a horse-breeding region and easily reaches by bus, train or rented car and takes place on the last weekend in July. The Soma Nomaoi Matsuri originally organized as a military exercise by the founder of Soma Clan called Taira no Kojiro Masakado. The event has been preserved through the flow of history, a descendant of the Soma clan currently assumes the role of supreme commander in the festival. 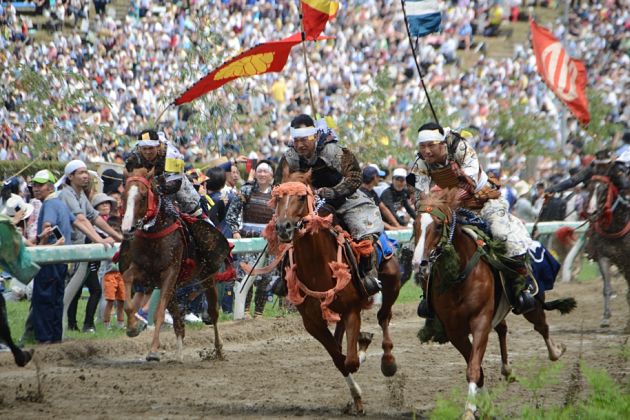 The event usually takes place concurrently at three vital shrines as Ohta Jinja Shrine, Nakamura Jinja Shrine, and Odaka Jinja Shrine. There stand more than 500 people in traditional armor participate with their horses. If the first day, it has the ceremonies before the horse events, the second day is the highlight of the festival. In the second day, there appears the horse race and the horseback battle in which the proud riders are in traditional samurai armor and clans fluttering in the wind. On the last day of the event, the barehanded volunteers chase a blessed horse so as to capture it. It is firmly sure that you will experience the Warring States period.