Generally, many people think that sushi only has rice and seafood. However, this scrumptious dish is more than this. Only professional chefs who have made sushi or gourmets of sushi know that the rice used for making this dish is especially seasonal rice. Moreover, coming with the rice is one or some other ingredients such as special vinegar, salt, sugar, sake wine mirin, and so on. The common rice that used in a normal family meal in Asia is not preferred when making sushi. It must be short-grained, completely white, and have a good smell.

People usually think that every sushi needed the seaweed wrapper called nori to cover the rice inside, especially with Western-style sushi. This opinion is completely wrong that any kind of sushi just needs a piece of rice under the topping above including a slice of squid, shrimp, salmon eggs, mashed potato, sweet omelet, and more. If you are tender with spicy flavor, ask the chef to put a little wasabi inside to wake up your taste. Japanese traditional soy sauce and pickled ginger cannot be eliminated from a perfect sushi meal. 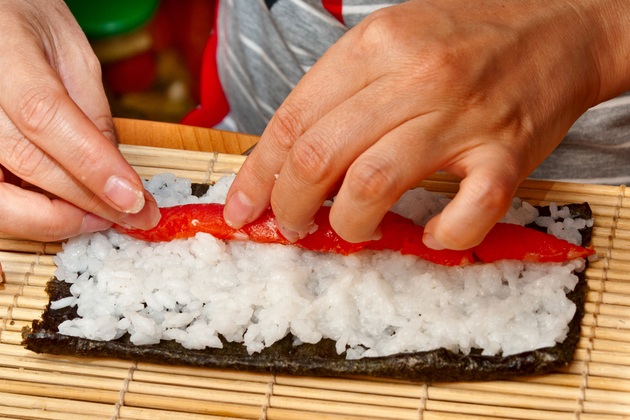 The Original of Sushi

Sushi is the traditional cuisine of Japan, but it does not mean that this dish came from “The country of sunrise”. The origin of sushi started with the earliest form as lacto-fermenting fish with salt and rice which is based on the paddy fields in the Mekong River flowing through Southeast Asia. This practice aimed to protect the rice and food from being rotten by using salt to preserve the freshness of food. 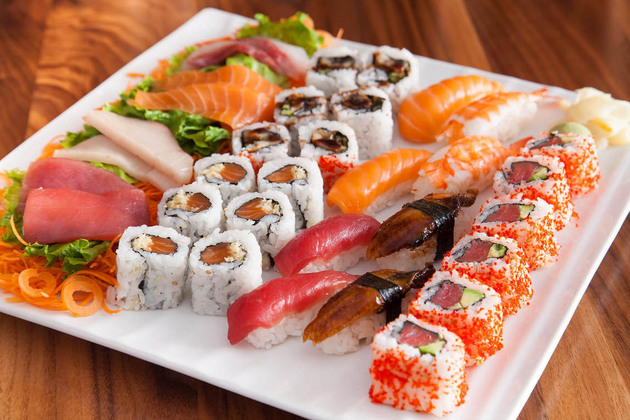 Sushi only entered Japan when the wet rice culture became typically during the Yayoi period around the 8th century. This practice then evolved when vinegar was used to speed up the time for preservation. The Edo period marks the event of Japanese people mixed fresh fish and rice together on a ground as you can see nowadays. The traditional Edo-style sushi came out with toppings are fresh seafood caught in the Tokyo Bay which is still well maintained in some high-class restaurants when you enjoy Tokyo shore excursions at the present.

Foreigners usually feel surprised or a little bit confuse about choosing their favorite sushi when walking into a restaurant specializing in sushi. A great number of types that not everybody knows is far from their expectations. In point of fact, there are two popular types of sushi: makizushi – the traditional sushi rolls often with seaweed wrapper outside and nigiri-zushi – the cylindrical pieces of rice with a seafood topping. They even don’t know that just sushi rolls have many types such as rolled by seaweed wrapper, very slim omelet, or thousands of tiny shrimp eggs.
Other popular types include temaki – rice and topping wrapped in seaweed with cone-shaped, inari-zushi – rice wrapped in tofu pouches, oshizushi – looks like a rice and fish tiramisu, and chirashi-zushi – seafood spread over a bowl of rice. 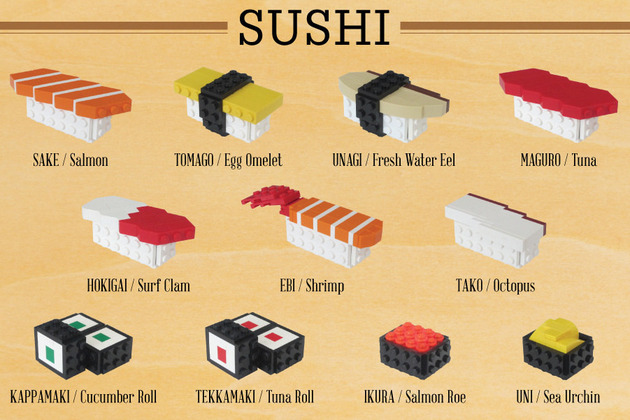 Any Japan shore excursion cannot miss the chance to taste different types of sushi around the country. Every region in this country has its own flavor of sushi. For example, a shore excursion to Osaka or Chiba is charmed with datemaki-zushi – sushi rolls with an egg roll, a Nara trip with the spotlight of mehari-zushi – rice rolled in edible plant leaves, and a visit to Shiga to taste funa-zushi – fish stuffed with fermented rice. 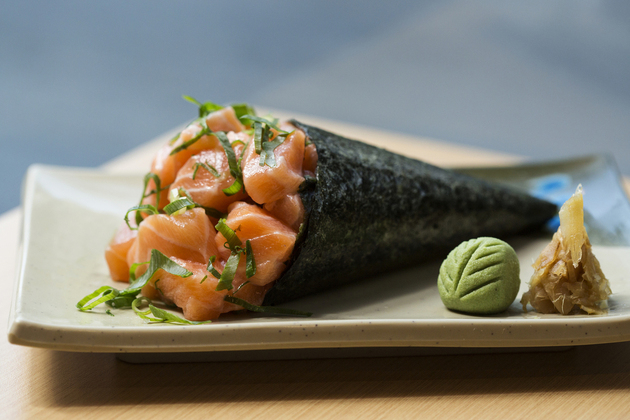 The main ingredient for making a sushi is seafood. Seafood topping is really abundant from numerous species of fish including salmon, bluefin tuna, yellowtail, sea bream, and sardine to other species living underwater such as clam, squid, octopus, shrimp, scallop, more and more. One of the most popular fish sushi is rice topped with a slide of red tuna which is not expensive and rare to find. The most expensive tuna sushi is otoro – the fatty tuna serving as a special dish sampled at the end of the meal in high-end Japanese restaurants. 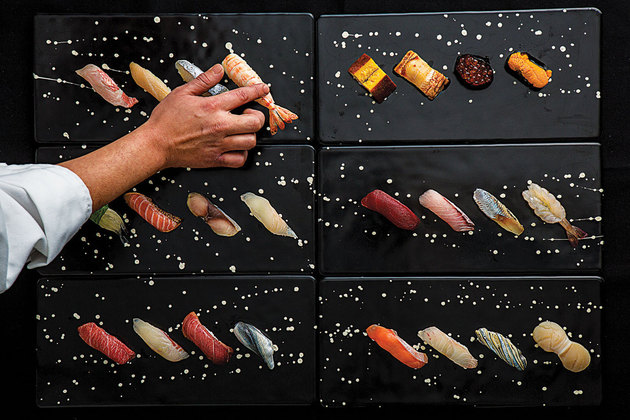 How to Make Sushi at Home

Firstly, wash the rice clearly under water. When it drains, put into a pot with 1 pint of water. Cover up by a lid and boil for around 25 minutes. Cooked rice has the perfect white color, good smell, and softy. Wait 10 minutes to remove the heat. You can tip the rice onto a large flat clean tray in order to cool the rice down faster.

Land the bamboo mat in a flat, place a seaweed sheet on top. Spread a little rice over three fourth of the sheet until the rice layer is about 0.5cm thick. Remember to wash your hand before touching the rice to avoid sticky. 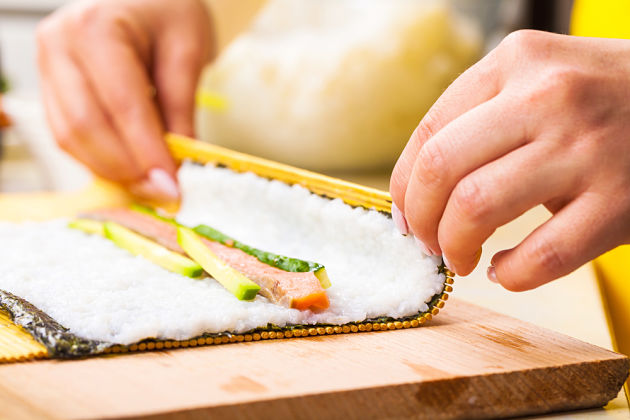 Next smear a little wasabi in a line near the edge of the rice. Sequent put tuna, spring onion and cucumber in a line with the wasabi. Roll up the bamboo mat slowly and carefully. Use both hands to press lightly until you get a perfect sushi roll. Remove the bamboo mat.

Dip a sharp knife into cold water and cut the sushi roll into easy-to-eat pieces. If you are not ready to serve sushi on a nice dish and sample immediately, wrap sushi in cling film and keep in a cool place, not in the refrigerator that the cold can dry out the rice. Sushi is best tasted with pickled red ginger, yellow radish, and soy sauce.