Asia is a pristine land of traditional culture, rich history, and diverse spiritual life. All of these aspects lead to the formations of several festivals. The best time to celebrate a festival in spring when the weather is not too cold or hot, the rain is sparse, and the views are spectacular with full-blooming flowers and lush green tropical trees.
Asia Shore Excursions would like to give you some useful information about top 5 wonderful spring festivals in Asia.

The Holi festival, known as the Festival of Colors, is an ancient Hindu festival having the history from the 4th century. This festival is one of the biggest festivals in India and also among the wildest ones in the world.

Be considered as the second Lunar New Year Eve, Holi festival provides a great time to start a new page of relationship including forgetting old feuds, forgiving grievances, and catching up with old friends. The festival reveals the good always wins evil that signifies the end of winter and also expresses the wish for an abundant spring harvest. 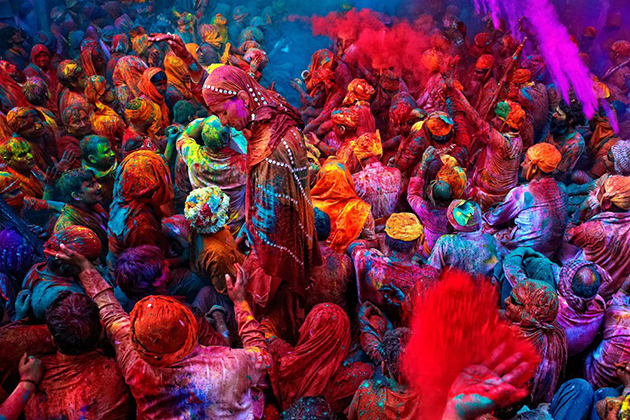 How is the festival held?

People set several bonfires before the festival to discourage the spirits of evil that can lead to troubles. Holi festival is messy, crowdy, and definitely unforgettable that only brave people can witness and join in. Crowds on the streets throw colorful powders made from natural material to others. Dancing through the vivid water, sing Indian folk songs, and sample traditional cuisine made from a plenty of savory spices.
Holi is not suitable to dress up your dress clothes, leave your important things such as passport, accessories, value devices at the ship.

What time to celebrate?

The festival is often held on the day after the full moon of March. According to Hindu calendar, Holi will be celebrated on the last full moon day of the lunar month of Phalguna.
In 2018, the festival will be held for two days: March 1st and 2nd.

Far different from other spring festivals in the world, Nyepi Day is definitely the quietest day of the whole year when everyone in the island abides following local rules. Daily activities are all stopped, every road is empty that nobody steps outside of their home premises. 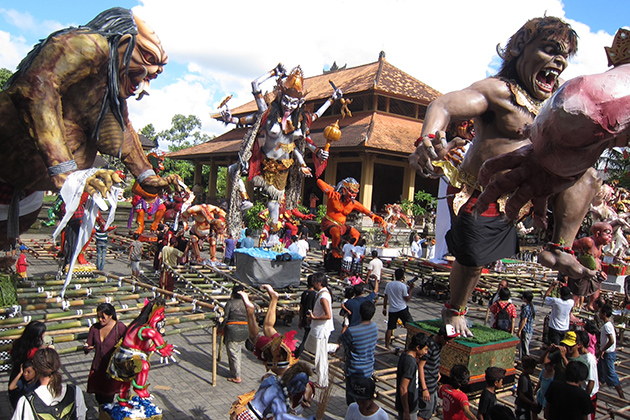 How is the festival held?

Has been celebrated for 78 years, the Nyepi Day follows the lunar sequence that marks the Lunar New Year Eve.
Before the silence day, pilgrims from all over Bali island hold a long walk towards the coastlines creating colorful processions named Melasti pilgrimages. Visitors should make your camera ready. This is the best time to capture a wonderful photo about this Nyepi Day.
On Saka New Year Eve night, Balinese pray for the blessing at the family temple that attached to several interesting conventional. In the street, bamboo cannons and special firecrackers make the sight full of smoke.
On the D-day, the calm completely covers the island with no fire, no travel, no activity, and no entertainment. The whole island is deep in darkest that you cannot see any light turned on. It’s a time for relaxing and contemplation and seems like the time for Mother of Nature to reboot herself after a tired year.

What time to celebrate?

The Nyepi Day is held every year based on the lunar calendar that changes every year but normally is in March or April. This year, 2018, the festival was celebrated on 17th March. Don’t feel regret if you missed this year’s one. Set a detailed plan hopping on Indonesia Shore trips for next year festival on March 7, 2019.

Songkran is not only the biggest festival in Thailand but also the largest water-fight festival in the world. The entire country becomes friendly fight each other with water and holds endless parties that can last nearly a week.
During the time celebrating Songkran, almost all buildings, banks, retail shops, and restaurants completely stop running, while big shopping malls often open serving tourists and also the demand of locals. 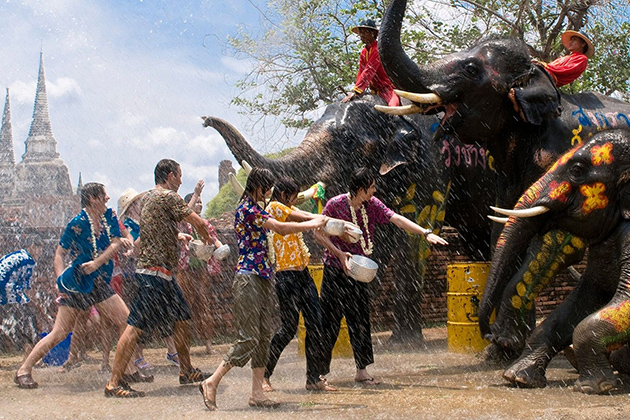 Songkran is the occasion for house cleaning, family gathering, and temple visiting. Thailand people don’t throw water at others for a bad reason such as making them wet. The meaning of this action is really beautiful that the water will wash off all misfortunes in the past year and welcome fresh lucky new year.

How is it celebrated?

On the first day of Songkran, locals perform the Rod Nam Dum Hua ritual which is the National Elderly Day. While younger people would gently pour fragrant water into the elder’s palm to pray for blessing.
The second day of the festival is the National Family Day. On this day, people wake up early, visit the temples and give alms to the monks. After that, they spend the day gathering with their family or walk along the streets, shooting water to each other. In the old days, Thailand people usually pour water from bowls, but now, they often use buckets and water guns instead.

The festival was calculated following the solar calendar. Nowadays, the Songkran in Bangkok is annually held from 13th to 15th of April.

Hanami is one of the biggest and most beautiful festivals that is held in everywhere in the whole Japan. The festival is an appreciation to cherry blossom trees – the trees represent the symbol of this country. “Hana” means flower and “mi” is viewing, match together, the name of Hanami is viewing flowers in English. 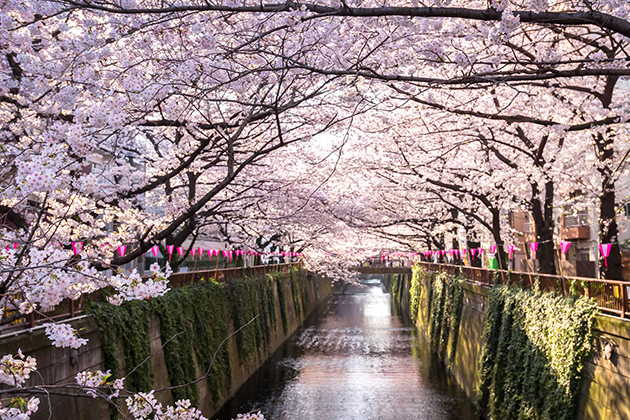 The history of Hanami

This ancient festival has been celebrated since the 8th century and focus on plum blossoms. In the 9th century, the focus changed into cherry blossoms which fully bloom in spring. At these early celebrations, people gently stroll along under the trees while poets wrote and recited poems about the beautiful sight that flowers bring.

How is the festival?

Right to the name, Hanami is the festival to view the full-blooming cherry blossoms in the spring. The sight is spectacular with flowers fully cover the sky seem like idyllic pinky clouds jumping with the wind. Soak in the serene atmosphere while listening to the symphony created by the wind.
More than just watching the beauty of cherry blossoms, Japanese people have the unique way to enjoy this wonderful sight. They organize a picnic with friends, family, and colleagues in parks, riverbanks, or anywhere the flowers are found. To admire this spectacular view, you have to walk through the crowds after crowds to book a good place. People sit around, eat traditional food such as mochi, sushi, kimbap, and so on, drink the famous Japanese wine – sake, and cheer together.
Besides, there are a lot of parks lit with colorful paper lanterns. Hanami is a big party so drinking is an essential part that drunken man can be caught. However, due to advance education, you don’t seem to worry about them too much.

When does it start?

The time holding is depended on temperatures that the flowers can fully bloom. This year, the festival has opened in Tokyo on March 17, March 19 in Fukuoka, March 20 in Osaka, and March 22 in Kyoto.

Pingxi Sky Lantern Festival – one of the best festivals in the world – is worth a visit by achieving high ranking in several charts of top festivals ever existed. Admire thousands of lit lanterns flying high in the sky, bringing the wishes, and leading to the happy new year.

History of the festival

The sky lantern was invented since 200s with the purpose to transfer the military messages. In the old time, some villagers move their home to hide in the mountain, but strong men have to stay to protect their house. When the spring comes again, they will lift lanterns to the sky as a sign to notice villagers come back. Finally, in the early 19th century, the Lantern Festival has already started annually.

How is the festival?

Pingxi festival offers a breathtaking sight with wonderful light shows, live music concerts, and a sky full of bright shining lanterns. Be fascinated by thousands of these flying lanterns stunning out the dark background of the black sky at the later night like an ocean of flying balloons with glitter effect. Don’t quickly consider that these lanterns made of paper can be burnt easily. With the special design, the heat not only non-catching the fire but also make the lanterns fly higher.
Under the majestic sky full of sparkling lanterns, enjoy the performances of locals dancing, singing folk songs, holding street carnivals and playing traditional games. Joining in the lantern riddle contests are the most wonderful, magical, fantastic, magnificent, and unimaginable experience in the downtown of Taipei.

The festival is annually held on the 15th day of the first month following the lunar calendar. In 2018, the day is March 2nd and the holding place is the Shifen Sky Lantern Square.